It seems that every Christmas season, a Facebook post about presents from Santa goes viral. The gist is that Santa should give one small gift and the parents should take credit for the rest. 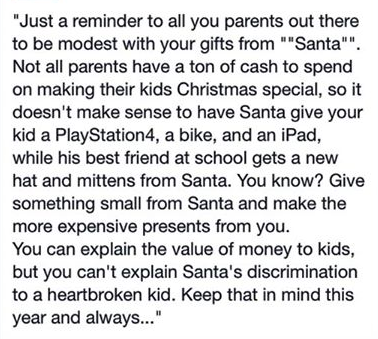 These posts are invariably hotly debated in the comments as holiday emotions run high.

Here at The Moms At Odds, we love a good seasonal hot topic and, of course, have different opinions about how many gifts Santa brings.

We go into the reasons behind our choices below, to hopefully help you decide what type of celebration is right for your family.

So let’s get into it. Does Santa bring all the presents or are just the small gifts from Santa?

In our house, presents from Santa are limited to a single, small gift. The present is related to the item my kids asked Santa for that year.

If you read about my kid’s gifts in my Christmas musings from last year, you’ll know one of the presents I got for free at a toy swap and the other I got for $5 from Facebook Marketplace. My excuse for the [gently] used toys is that Santa makes all the items in his workshop, they don’t come in plastic packaging like you’d find at the store!

I love the one-gift system because (1) it’s cheap, (2) it teaches realistic lessons about money, and (3) it doesn’t exclude other families who can’t afford the big, huge Christmas. 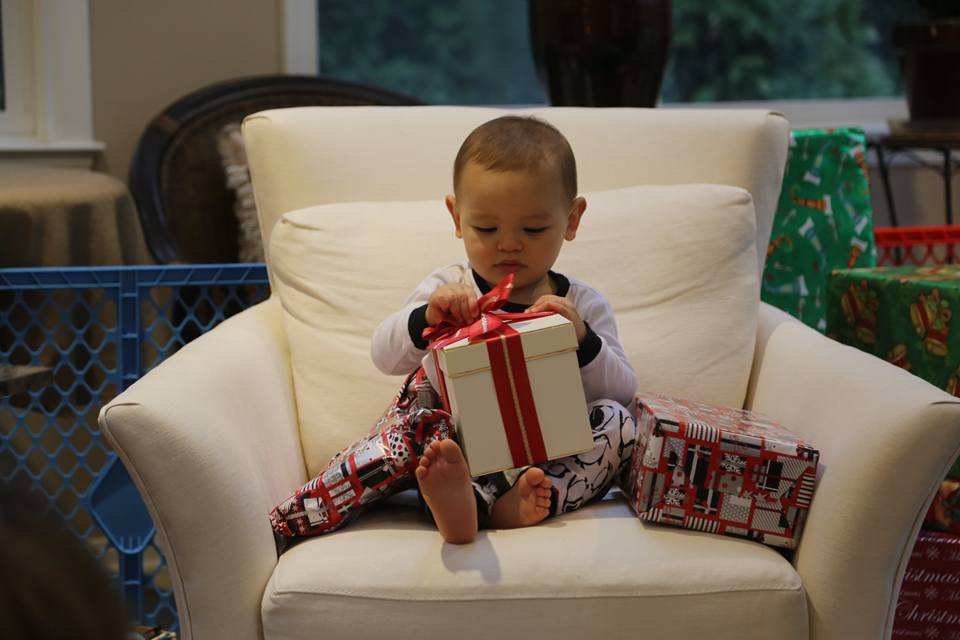 Let’s start with my absolute favorite reason for a singular present from Santa: it’s cheap!

I already have to buy so many Christmas gifts for my family, friends, and other people’s kids around the holidays that I become nervous checking my credit card balance come the end of December. If I bought my kids loads of toys, it would add to an already expensive Christmas holiday season.

Secondly, despite my best efforts for keeping the toy clutter under control… we simply have too much kid’s stuff!

My kids have so many toys they have forgotten about and haven’t played with in months. I like to reintroduce those toys on Christmas morning rather than adding more toys to the madness.

READ  How to Pull Off a Magical Christmas with Fewer Toys

In the magic story of Christmas, Santa’s elves craft toys specifically designed for each child.

In reality? Presents from Santa are paid for from parent’s wallets.

My partner and I, like many other parents I know, work hard for our money. And while I don’t want to burden my children with our financial situation, I want them to understand money is something you work for and use to buy everything from necessities to fun stuff.

Having tons of toys magically appear on Christmas morning as presents from Santa completely undermines this concept.

Additionally, I feel having excess in that way makes every toy less special and it’s “worth” a little less. 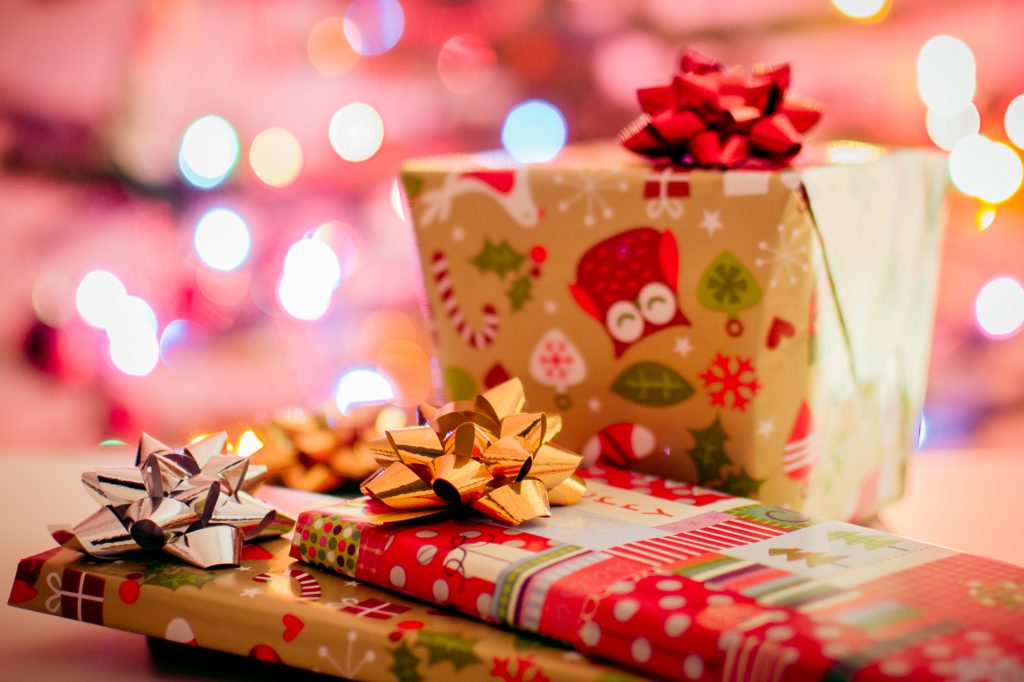 Protects Children Who Got Less Presents from Santa

This goes back to what we talked about in the introduction. It’s the original reason I started on the one-small-Santa-gift journey.

Let’s face it, all families do not have the same financial situations. The magic of Santa, however, is supposed to be free of money considerations.

Even if we try to teach our children important lessons about the true meaning of Christmas and not bragging about the toys they received, we have to be honest with ourselves.

When kids come back from winter break, their Christmas presents are probably the most exciting thing that happened to them while they were away. Of course they’re going to talk about them.

from Santa, but she only received an orange and new hat? What kind of message does that send? How does that make the other child feel?

Kids understand that one family has more money than another, but Santa isn’t supposed to be about money. Why would Santa discriminate by bringing a nicer present for one child?

I have no problem telling my children that another family is better off financially than ours. When they see some of the insane birthday gifts at other kid’s parties they can clearly see that. But I would hate to be the reason why another child feels bad about themselves over Christmas presents from Santa. 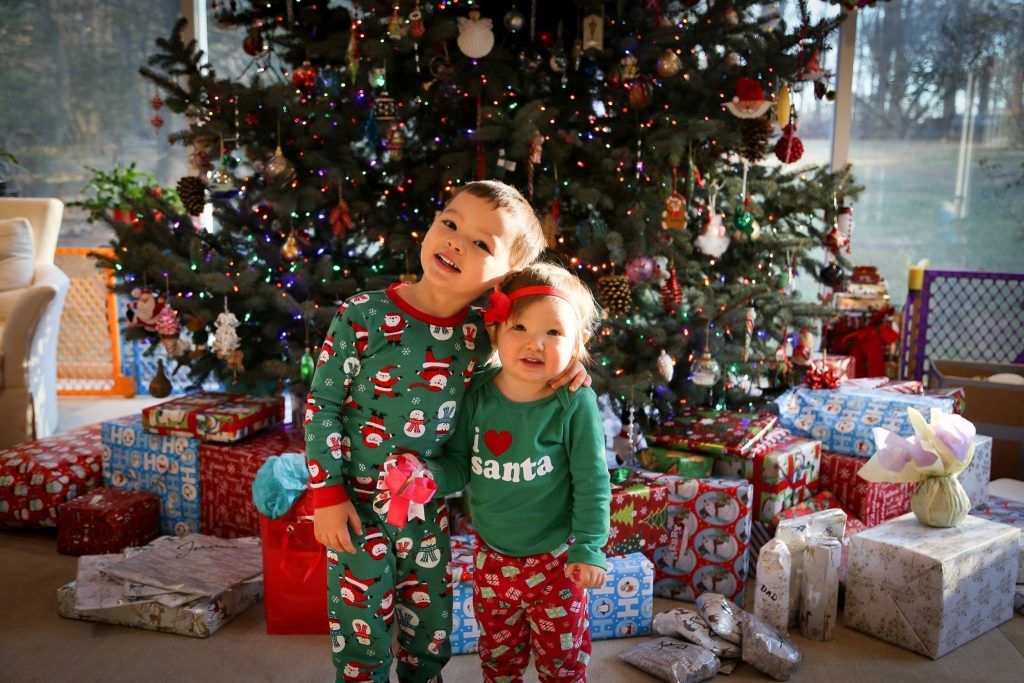 Rachel says | “Do Santa Your Way”

We don’t have any set rule on our house about how many gifts Santa brings, nor do I plan to start one.

I love having a big Christmas for my kids!

When it comes to presents from Santa, I take a “you do you” stance.

I fully recognize that I risk sounding completely heartless by admitting this. But I swear that I am not a total monster who simply doesn’t care about others!

I am a mom on a tight budget. I save a little where I can all year for Christmas. My kids certainly aren’t getting iPads this year from either Santa or myself.

Though we may have multiple Santa presents, I do try really hard to teach my kids to not be jerks about it.

I realize that we have been very lucky and I’m sympathetic to families who are less fortunate.

I just don’t feel that the one gift rule is an effective way to address inequality that will last much longer than their belief in Santa. 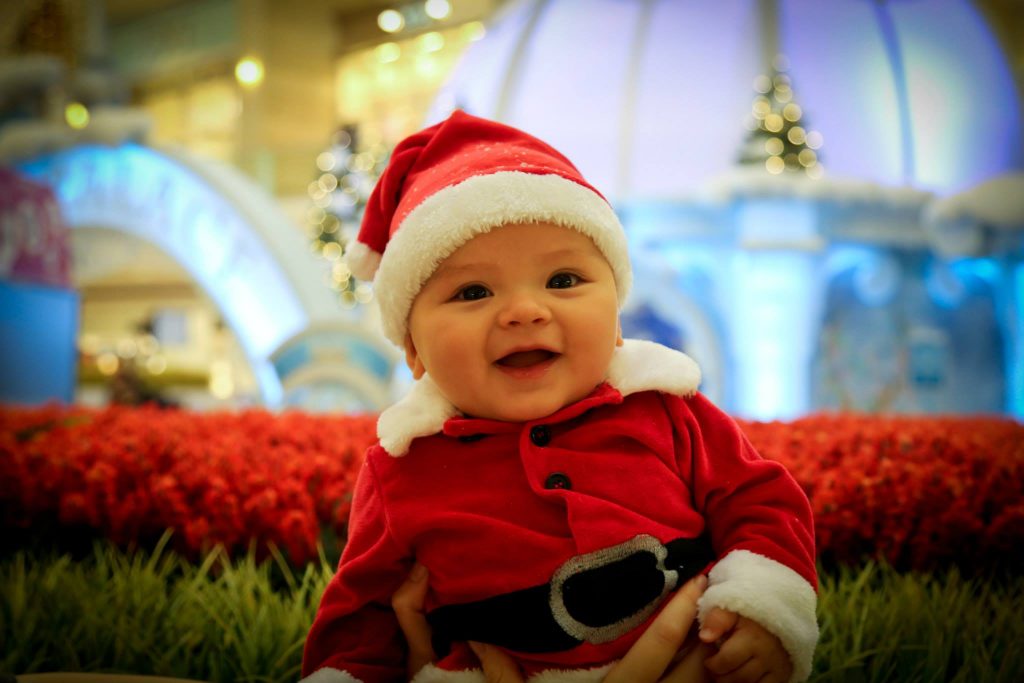 There are tons of differences in how people celebrate Christmas and Santa. And people hold some surprisingly strong opinions on things like whether or not Santa wraps gifts (a heated debate between my husband and myself).

I know families where Santa only brought the stocking and others where he brought all of the gifts. Some Santas leave glitter footprints or adorable personalized sacks

full of goodies. Some even leave a child’s gifts at more than one house.

Families have their own reasons for why they celebrate a certain way.

For instance some celebrations are totally secular, some deeply religious, and still others are interfaith. There’s even cultural differences about which day Santa visits.

Let’s not forget that some parents choose to forgo Santa altogether.

The Santa narrative is not standardized. Getting all of these different families on the same page about Santa, even for a good cause, is perhaps noble, but not practical.

At our house, we talk about how different families celebrate in their own special ways and some don’t do Christmas at all.

Christmas Isn’t Just About The Gifts

We try really hard to emphasize the joy of giving.

We have gotten my son into the spirit by donating old toys and baking cookies for neighbors. I also help him pick out or make gifts for family and friends and he especially loved picking out a gift for a child from our local giving tree.

Each year I look for new age appropriate ways to get my kids involved in giving to family, friends, and our community.

Yes, my son is still excited about the presents he receives, but he is also thrilled about giving.

We don’t make Santa the focus of our holiday, though one of the reasons we like the Santa tradition is because he embodies the spirit of selfless giving.

Santa is a model of the generosity we aspire to duplicate.

By de-emphasizing what we receive, the specific number of gifts from Santa versus mom and dad seems sort of irrelevant. That’s just not the focus. 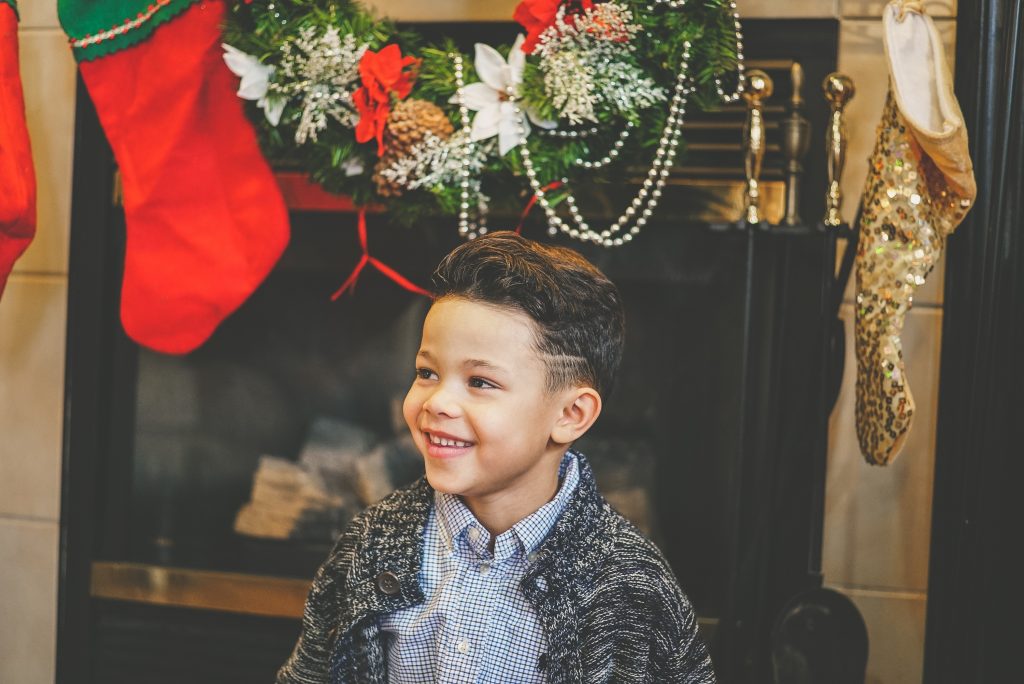 I’m sure I’m not the only mom out there trying to teach my kid to be grateful, humble, and kind.

We work on this all year, but Christmas is a great time to really drive home these lessons.

In our house, the Santa gifts aren’t really differentiated from the other gifts except for the name on the tag. I honestly don’t think my son really kept track of which were Santa gifts last year.

I have very little confidence that even if only one gift had been from Santa, he would not have remembered which.

The thing is, I don’t want my son to be bragging regardless of who’s name was on the gift tag.

Even at 4, my son realizes that other kids have things he doesn’t. So we make a point of being thankful for what we have and also to encourage empathy for those who have less.

The unfairness in the world doesn’t start or end with Santa. The average age for kids to stop believing in Santa is 8 year old. Teaching my child to be sensitive to others will hopefully last him much longer.

How many presents does Santa bring in your household? Let us know in the comments!

To get more of our holiday debates, be sure to follow us on Facebook and join our newsletter.