What’s a parent to do when their child won’t stop using inappropriate language? Whether it’s cursing or potty talk, it’s bound to get you searching ‘how to stop a child swearing’.

Here are 11 tried and true methods to get your child to stop using those naughty words once and for all.

When thinking about how to talk to your child about swearing, start by sitting them down for a serious conversation. 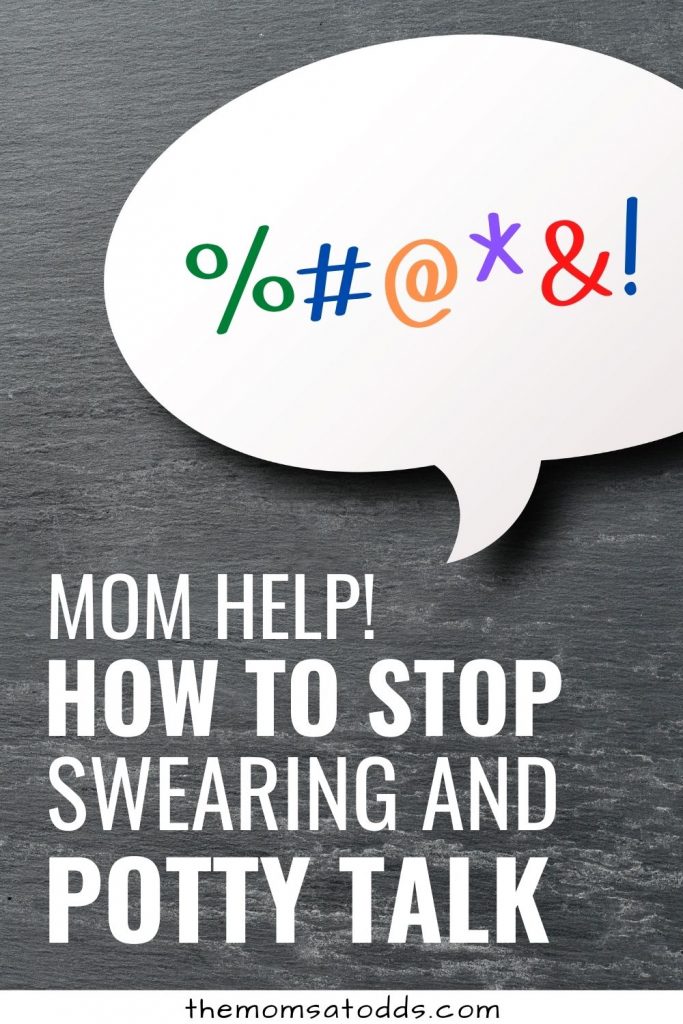 Explain that there is almost no situation where swearing or potty talk is appropriate and acceptable. Cursing and other questionable languages are reserved for adults since they are more capable of filtering and judging the situation and their surroundings.

The talk should be dedicated to the topic of appropriate language, don’t use this as a time to bring up other parenting concerns you have. This will reiterate how important and serious the issue is.

Many children, no matter the age, will appreciate being treated like an adult with respect. After they get over the embarrassment and initial anger, of course. 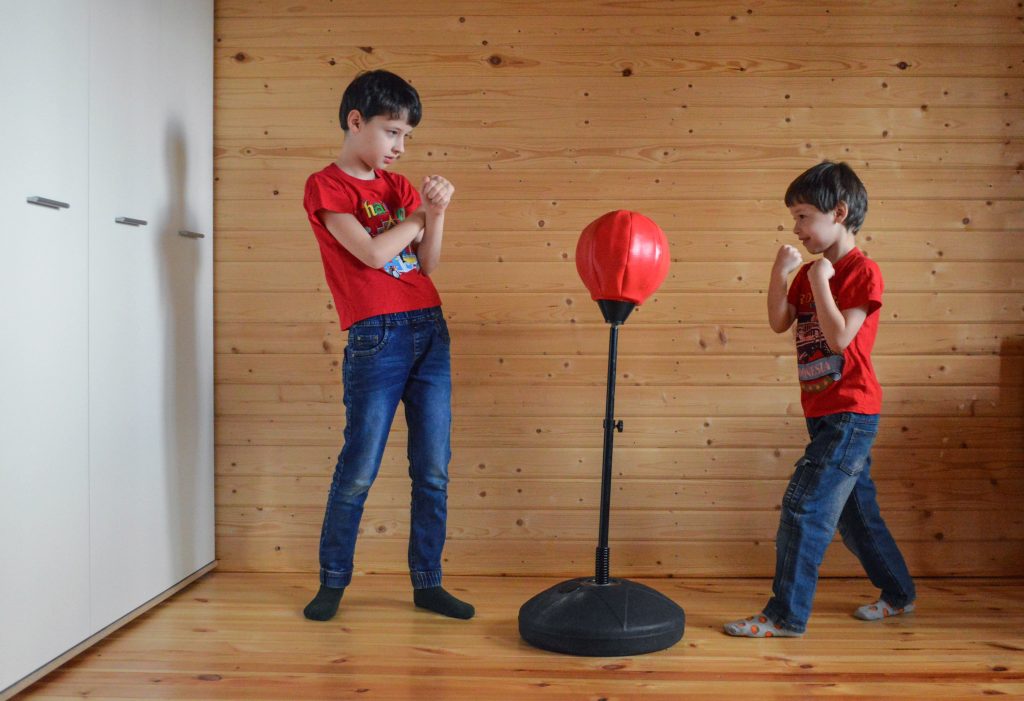 Many times swear words are used during times of anger or frustration. So give them another way to express themselves during the tough times.

If they’re a physical child, consider getting a punching bag for them to let it all out. We love this inflatable ninja because the base comes pre-filled with sand, just add air! And while it comes with a patching kit, we haven’t had to use it yet because it’s super durable.

Other tactile outlets could be things like popping bubble wrap, jumping on a trampoline, or doing push-ups.

A verbal idea, albeit simple, is to teach your child to let people around them know when they are overwhelmed. Something easy like saying, “I’m feeling angry/frustrated/sad”.

For older kids, I like the idea of teaching them to write down what’s bothering them on a piece of paper. Then rip it up. That’s it! Simple and effective.

A similar idea that we use for younger kids in our house is these worry dolls from ten thousand villages. Children whisper whatever is bothering them to the dolls and like magic they have their worries taken away.

The use of potty words is more for attention and humor. Our kids love memorizing jags and quips from a hilarious (for them!) joke book for kids. We just have to remind them of this appropriate humor when they get off track with potty talk.

Be Clear and Consistent

Choose a particular phrase you want to use to describe banned inappropriate language.

This can be as simple as calling something a “no-no word”. Don’t try to explain the difference between potty vs. swear vs. rude words. So words ranging from “the f-word” to “poop” and even “shut up” all fall in the same category.

It should also be clear that words you have deemed inappropriate should be avoided at all times. Be consistent about enforcing this policy so there is no doubt.

How to talk to your child about swearing largely depends on the age. This point of simplicity is especially important for young children. They can get confused when you put words in different rules and buckets.

** It’s important to note that many parents aren’t comfortable calling something a “bad word”, since it’s likely they’ll hear other adults/kids using it. You don’t want them thinking other people are bad just because they use those words, it’s more about teaching what’s acceptable in your household. 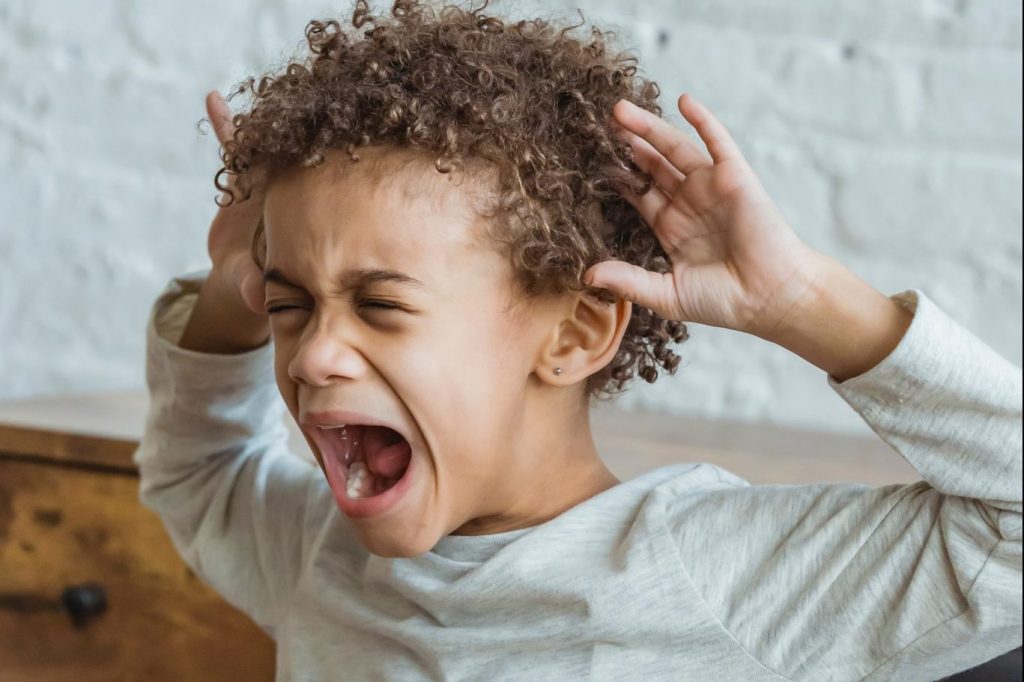 Be Honest and Give Substitutions

When kids use inappropriate language, explain the exact meaning of the word. After all, these are actual words in the English language with real backgrounds, not just empty thoughts.

Once they understand what “stupid” means, they’ll realize that a dish or shirt can’t really be “stupid”. And using that word to describe something often just appears ridiculous and ignorant.

This also works with sh*t and crap. If they know talking about poop is inappropriate, they’ll understand why you don’t use similar language.

And let me tell you, parents reminding teens of what the f-word means will humiliate them in a very satisfying way.

Once many kids understand (or are reminded of) the meaning behind the word, they’ll lose interest and not want to say it.

If they like the idea of just saying a word out of frustration but don’t like the meaning behind it, give them other options. Whispering an angry “sugar” or “fiddlesticks” can also get the job done.

READ  Have You Told Your Kids the Two Wolves Story?

If your kids will just not stop, one way how to punish a child for swearing or using other inappropriate language is to make them go somewhere else.

Say, “I understand you want to use that language, but you can’t use it in front of the rest of the household.”

If they’re using potty talk, tell them they can say those words all they want provided they are in the bathroom.

For other rude or swear words, instruct that since those words can be hurtful and offensive to others they need to stay alone in their room as long as they continue to use that language.

Chances are they’ll get bored after two minutes and come back out to rejoin the family.

An old concept that has stood the test of time. If you’re unfamiliar with it, any time a swear word is spoken the offender must put money in the jar.

Hitting them in the wallet can be an effective deterrent for older kids and teens.

Though the jar can be literally any container, this method is so popular, you can actually buy “swear” jars like this one specifically for this purpose.

The swear words and amount of money should be agreed upon ahead of time so everyone is on the same page. If you want to set a good example, you should be prepared to pay up if you curse too.

Children often mirror what they see and hear. By avoiding swearing yourself, you model the behavior that you want.

Though kids can pick up curse words from several sources, we can’t ignore our influence as their parents.

I, for one, know I’m guilty of letting a swear slip around little ears. So when my 3 year old dropped one on me, I was pretty sure I had myself to blame.

Modeling for them how to handle their emotions without cursing as well as swear word alternatives can help them learn these behaviors as well. 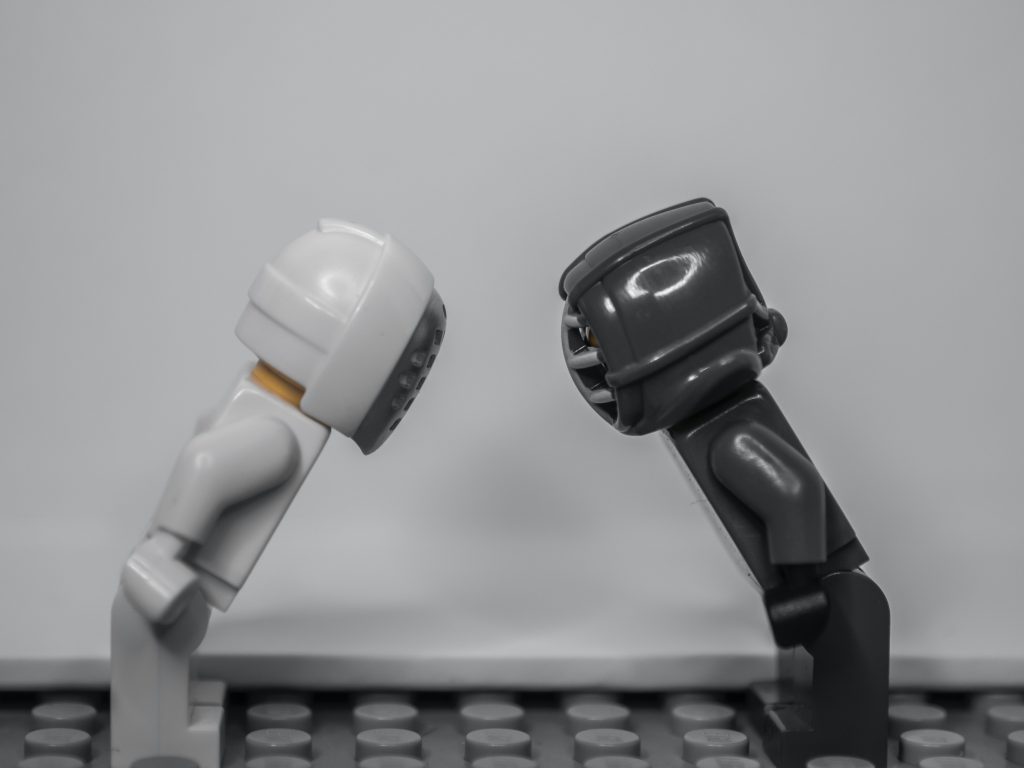 Regardless of your own feelings about certain words, you can still recognize that they can make others uncomfortable. Teaching your kids to respect others with their words can keep them from swearing at inappropriate times and places.

For instance, maybe you don’t have house rules about cursing, but their friend’s house does. Respecting the house rules in other’s homes is important.

Grandmas, schools, and churches tend to be notorious for their stricter stances on swear words, so teaching your kids to respect that can keep them out of some trouble.

One way to contain swearing is to set clear boundaries about when and where it is and isn’t acceptable.

Is it ok to curse at home? Only in your room? Does potty talk have to stay in the bathroom?

Another boundary could be about how swear words are used.

So perhaps an expletive when you stub your toe is ok, but insulting someone with a swear is not. Profanity may not be banned, but cursing at someone else could be crossing a hard line.

These sort of boundaries can be too nuanced for young kids and would work better for teenagers who understand the differences in usage. 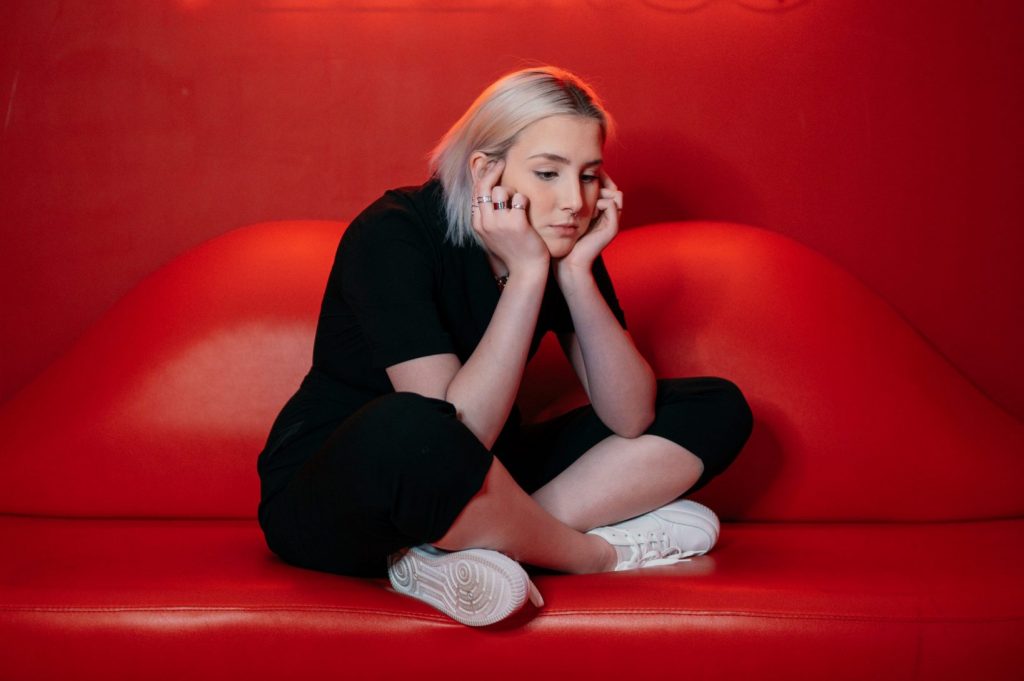 Young kids and toddlers often swear for attention. They don’t truly understand the meaning of the words, but they recognize when it gets a big reaction.

Honestly, even older kids may use curse words to get a rise out of you.

Stay calm and don’t acknowledge the word. Do not react at all – don’t frown, smile, laugh… nothing. By not giving any attention to the word you won’t encourage more cursing and many kids will move on.

It can also help to make sure you’re reacting positively and praising when your child is using polite words and good manners.

Part of the appeal of swear words is that they are taboo. By doing nothing and making them just simply normal words, you sort of take their power away.

Some parents just don’t find swear words a big deal, others just don’t find it a battle worth fighting. And since the words aren’t forbidden, they aren’t special, and lots of kids won’t give them too much notice.

We can’t vouch for the effectiveness of this method, but it is an option and if it works for your family that’s great! 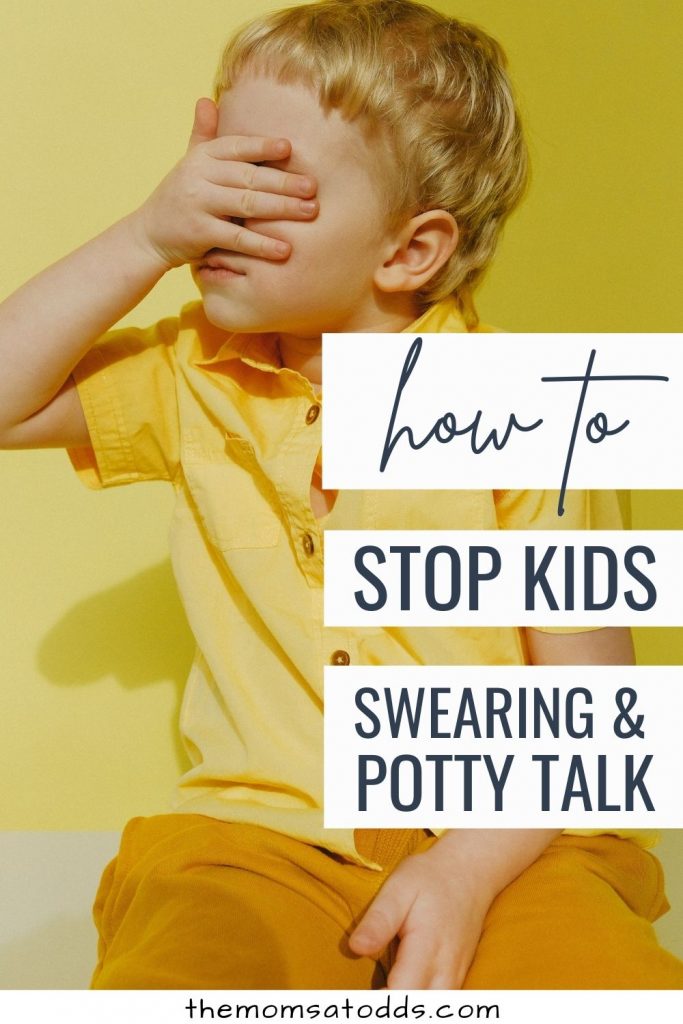